In 1967 Jeep introduced the dependable T14 transmission. The transmission was an obvious improvement over the T86. For the most part the transmission met the expectations of handling the increased torque and horsepower of the of the 6 cylinder engines.

The Borg-Warner manufactured T14 is a light duty, three-speed transmission. The T14 would see service behind several vehicle applications predominately the CJ5 and C101 Jeepster Commandos.  Jeep would continue to offer the transmission up until 1975. The T14 was used successfully behind the Dauntl

ess 225 V6 engine until approximately 1972. The transmission would also experience the introduction of the legendary AMC 232/258 inline six engines. Like the T86, The T14 is a top loaded and top shifted transmission. The T14 offers a completely helical cut gear set and is synchronized in all forward gears. What really cuts the T14 off from the T86 was the introduction of its sliding clutch collar rather than sliding gears. This addition would add strength and dependability to handle both the V6 and inline 6.

The T14 transmission measures in at 8.75” in over length and weighs approximately 81 lbs. The T14 may have the following casting numbers: T14, T14AA or 1302 found on the passenger side of the transmission. The transmission features both a cast iron case and top cover which is retained by six bolts.  The T14 transmissions were available with two different input shaft configurations. These can be broken down by the two different 6 cylinder engines being offered. The earlier Buick V6 had a T14 with a 1-1/8" x 10 spline input shaft with a .59” pilot. The stick out length was 8.875”. The AMC 232/258 had a T14 with a 1-1/8" x 10 spline; however, the transmission input shaft was one inch shorter with a stick out of 7.875” and the pilot tip was enlarged to 3/4”. 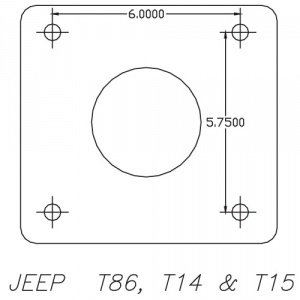 The T14 transmission was initially used in front of the large hole Dana 18 transfer case. The T14 transmissions would see the introduction of a 1-3/16", 10 spline output shaft for mounting the transmission to the transfer case input gear. The T14 was the only Jeep transmission to feature this distinctive spline configuration. It is really anybody’s guess why Jeep would introduce this unique spline count, as it did not last. Jeep would actually return to the 1-3/8", 6 spline output shaft with the introduction of the T15 transmission. It should be noted that Advance Adapters does offer the Saturn overdrive for the unique 10 spline T14/ Dana 18 combination.

The T14 was used by both Kaiser Jeep and Later to AMC Jeep. This is really why we see the variations in the transmissions. The reign of the T14 was approximately 6-7 years. Jeep Commando sales never really reached the numbers AMC was hoping for. The vehicle would be discontinued in 1972 and with it the T14 was retired.  This probably a good thing as AMC had plans for bigger V8 engines like the 304/360 V8 and with it came the stronger T15 and T150 transmissions.