As U.S servicemen returned home after the conclusion of World War II, Their desire for the Jeep lingered on. In 1945 Willy’s would respond by introducing the first civilian jeep. A key component and ultimate success for Jeep lied in the dependable Borg-Warner T90 transmission. Although small in size, the transmission performed reasonably well and would continue to reign as the standard transmission for nearly 25 years.

The cast iron T90 transmission is compact at only 8.80” long and 14” in height. It utilizes a cast iron top cover which is retained by six bolts. The case ha

s a large bulge on the driver's side. There are also two noticeable bosses on the driver side that were used as provision

s for side-shifting version of the transmission. The T90 is relatively light at 70lbs. 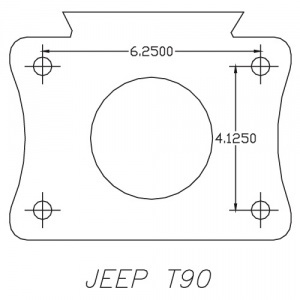 shaft for mounting the transmission to the transfer case input gear. The transmission input shafts were available in two different designs. The 6 cylinder engine applications had longer inputs varying in 9.125” to 9.25” shaft stick outs with a 10 spline 1-1/8" diameter.  The 4 cylinder engines used a smaller and shorter input shaft at a 7" stick out with a 15/16" diameter 10 spline.

The T90 transmissions can be sub categorized into 3 versions. They were all synchronized in second and third gears.

All of the gears were helically cut with the exception of first and reverse, which were spur gears. The differences were in the input shafts, shift controls, cluster shafts and transmission gear ratios. 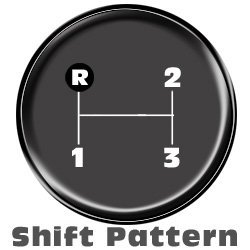 The T90A1 transmission was used behind the four cylinder L head commonly referred to as the “Go Devil”.  The transmission was standard from 1946 to 1962. This version had the shorter and smaller input shaft. The inputs were 18 tooth count on the helical cut of the shafts. This early T90 normally had a felt material as a method of sealing for the front bearing retainer assembly. The transmission gear ratios for this transmission are 2.79:1 first gear, 1.55:1 second gear, 1:1 third gear and 3.79:1 reverse. When doing an engine conversion with the T90A1,  A longer 6cyl input shaft PN716014 replacement will be required. The cluster gear will not need to be replaced as the new input also shares the same 18 tooth helical cut as the smaller original shaft.

The T90C transmissions were used from 1963 to 1971. They were found behind the “Hurricane” F-Head four-cylinder engine. The T90C consisted as the same basic build as the T90A and the case casting actually reads “T90A”. It utilized the smaller and shorter input shaft; however, the difference lied in the cluster gear and transmission ratios. T90C has a 16 tooth helical cut for input gear instead of the 18 tooth. The transmission also had different gear ratios of 3.34:1 first gear, 1.85:1 second gear, 1:1 third gear and a 4.53:1 reverse. When doing an engine conversion with the T90C, A longer 6cyl input shaft PN716014 replacement will be required. The cluster gear PN716018 will also need to be replaced as the new 18 tooth input shaft does not share the same helical tooth count. This transmission was commonly used with vehicles using the 4.27 axle ratio.

The T90J was used behind the six-cylinder trucks and wagons from 1952 to 1965. They were used with both floor mounted and column shift transmission linkage. They always had the longer 9.125” to 9.25” stick out input shaft with a 10 x 1-1/8" splines. The T90J utilized a 18 tooth, helically cut input gear. The transmission had gear ratios of 2.79:1 first gear, 1.55:1 second gear, 1:1 third gear and 3.79:1 reverse. When doing an engine conversion with the T90J, The transmission has the longer input shaft, so input shaft replacement will not be required.

The T90 deserves every bit of the near legendary status it has received, but it does lack in comparison with most modern transmissions. The low axle ratios of early jeeps and lack of overdrive limit the drivability of many old Jeeps. Couple this with the short wheel base of the older Jeep, Jeep owners are left with little options for better highway speeds. 5 speeds are generally too long to convert. One of the few overdrive options for the early Jeep is the Saturn Overdrive. It allows the Jeep owner to retain his dependable t90 while also achieving the rpm reduction and higher highway speeds so dearly needed.