The rugged Scout Dana 300 is one of the most commonly sought after transfer cases by both IH and Jeep enthusiasts. It is also one of the most misunderstood and misidentified. The misconceptions are not all that complex once you know the history, development and key attributes of this somewhat rare transfer case.
The Dana Corporation supplied both Jeep and International Harvester (I.H.) with virtually the same Dana 20 transfer cases prior to 1980. It would only seem logical that as Jeep went to the Dana 300 that I.H. would also follow suit, and they did….well, kind of. When Jeep introduced its’ version of the Dana 300, it was a big step away from the Dana 20. Instead of the older “Texas” bolt pattern, The Jeep 300 had a new round circular six bolt pattern on the front of the case, as well as an impressively lower 2.62 low range.   Jeep also introduced a new line of transmissions for this transfer case where the output shaft was separated from the transfer case. The new Jeep 300 had a bearing supported female splined input for the transmission output shaft and transfer case to connect.
The Scout 300 made its’ debut and sad finale in 1980. I.H. was enthralled in a lengthy and nasty labor strike in 1980 which limited production to only 30,000 Scout II vehicles. Politics of the strike aside, The Scout II would never see production again and sadly the company would not survive. This limited production of the Scout 300 featured the new low 2.62, but unlike Jeep, IH kept their same transmissions as were used on the Dana 20. They therefore also kept the same mating system which utilized the “Texas bolt Pattern” and transmission output shaft configuration. The Scout 300 can best be described as a hybrid between a Scout/Jeep Dana 20 and a Jeep Dana 300, but it was essentially a Dana 20 with a 2.62 ratio. This is what makes this transfer case so sought after; the Dana 20 and the Scout 300 are interchangeable.
Since the Scout 300 looks like a Dana 20, many find it hard to differentiate between the two. There are 4 easy ways to clearly I.D. a Scout Dana 300 transfer case:
1.      The Texas bolt pattern that was common on the Dana 20 is still used on the Scout 300; however, upon a more detailed inspection it is clearly visible that the Scout 300 omitted the bottom hole on the 5 bolt pattern and only used 4 bolt holes. In other words “The southern tip of Texas was been wiped off the map.” This was necessary to make room for the 2.62 gear set.
2.      Check your oil pan. The Dana 20 and the Scout 300 both use a pan on the bottom of the transfer case. The Dana 20 has a noticeable 1” sump pan. The Scout 300 has a sleeker flat style plate.
3.      The rear output shaft nose cone on the Scout 300 were aluminum just like the Jeep 300 where as the Dana 20 were cast iron. It was also the norm for the speedo cable on the Dana 20 to be on the inner portion or driver side of the nose cone. The Scout 300 were on the outer portion or passenger side.
4.      The shift base for the transfer case shifters on the Scout 300 are also aluminum vs. the cast used on the Dana 20 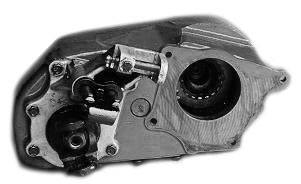 The Scout 300 was impressively strong for its compact size. Coupled with the lower 2.62 ratio, this transfer case is a prime candidate for a small wheel based vehicle. The transfer case is not indestructible though and we have seen failures to the rear output shaft. Advance Adapters offers a heavy duty 32 spline output shaft kit under PN50-3034 as an upgrade.