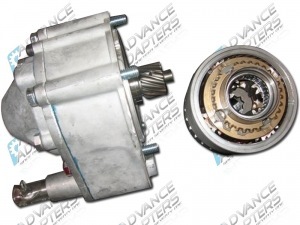 This unit fits Mitsubishi Jeep with a 31 tooth drive gear and a Metric 10 spline transmission output shaft. This all-range overdrive is a great addition to any of the early model Jeeps from 1941 to 1971, and I.H. Scouts 1961-65 with the Model 18 transfer case. The addition of this 25% overdrive unit offers you the needed gearing that the early Jeeps were lacking. The Saturn overdrive is a fully synchronized unit that can be shifted-on-the-fly. When installing the unit, only minor modifications are required to the floorboard for the shifter. The Saturn is built to handle up to 300 ft./lbs. of torque, well within the range of a stock V8. If you are interested in a lower gear set for your Dana 18 transfer case, but would like to retain your overdrive, we offer a Saturn bowl gear that will work with the gear reduction kits currently on the market. If a low gear set is purchased, we have available a Saturn overdrive less the bowl gear.

The Saturn is the original unit designed and developed by Warn Industries. Advance Adapters purchased the tooling, engineering data, and inventory from Warn in 1991. The components we manufacture today are the same as the old Warn components. We have incorporated a few upgrades on the units we sell today, but these units are all still interchangeable with the original Warn overdrive. (Note: The Saturn is not compatible with the Husky unit.) The Saturn overdrive installs directly on the backside of the transfer case through the inspection cover. No cutting or modification of the drivetrain is required. No relays and electrical connections required.